skip to main | skip to sidebar

We're in Florida.  Our trip hauling the boat south on I-95 started off very well.  For the first time in the 3 years we've done this trip, there were no traffic or storm issues in DC or Richmond.  We got to NC and were way ahead of schedule.  So we thought we'd pull of in SC around 11pm and sleep for a few hours.  We got up at 3am refreshed and ready to finish the haul.  But then, I did my safety check.  Oh, nooooo; One of the hubs on our trailer was completely destroyed.  Obviously, we picked the right tow vehicle (2001 Ford Excursion 7.3L Diesel) as I didn't even notice it driving-wise.  I called Boat/US Trailer Club and they had a service tech to us within an hour.  However, it took him nearly 3 hours to fix the problem, which was better than it could have been since I had a spare hub.  Otherwise, it would have taken until a local store opened to drive and buy one and then install it.  I won't get into the part where the spare hub I had didn't have a disk brake on it and I had the guy install it anyway (hey, it's an Excursion, it weighs more than the boat and the trailer!). 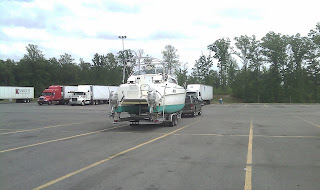 We continued on for about 400 miles until I looked back and noticed that the caliper on that hub had fallen off.  We were in a construction zone with no shoulder.  I just kept driving and didn't say a word to Kristen.  Again, I knew the truck would handle the load fine, and I didn't see any sparks, so pulling off onto sand was not an option.  We then hit a 5-mile backup just outside of Fort Pierce and missed our 3pm off-load at Cracker Boy Boat Works.  They kindly put the boat in guarded storage for the night and we got a hotel room (thanks Cindy!).  We launched at 9am the next day (Tuesday, 5/4) and then dragged the ailing trailer to Vero Beach to be repaired (er, upgraded from a tandem to a triple axle) at Float On.  Got a slip at Harbortown Marina and are now, off to the marina's restaurant, Harbor Cove, for Cinco De Mayo.  We'll head out the inlet tomorrow and decide once we're out if we'll head to Palm Beach or just cross the stream to West End.
Posted by Kurt and Kristen Kolb at 3:40 PM